started a topic about 5 years ago

It would be great to have the possibilty to see the folder names in the tab titles.

When I have two sessions with the same name in different folders, I cannot distinguish them by their tab title. 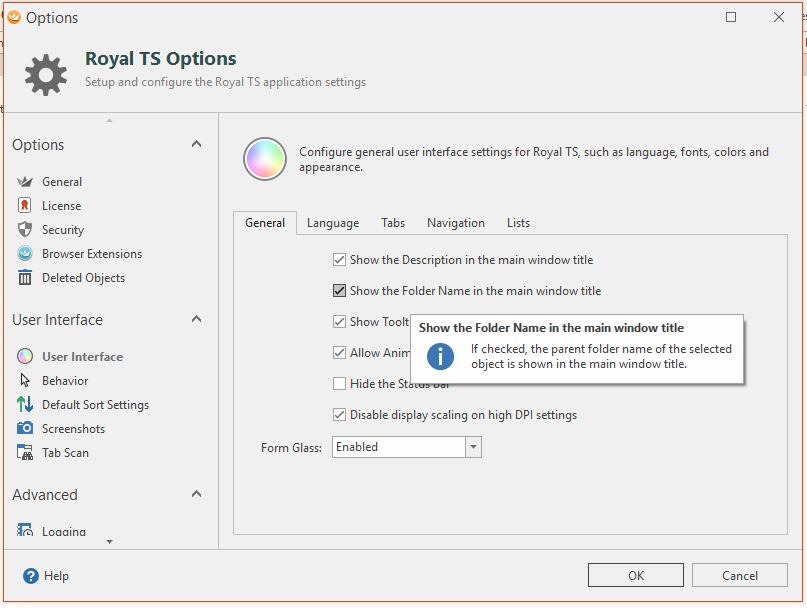 I miss the way that MRemote handled group Tabs. You could have a group tab on display with the individual connection tabs nested under it in the "Dashboard" panel. So when you had multiple connections open belonging to different "groups" you would instantly see the different groups/folders they belonged to.

It was a bit limited in MRemote in that the group tab name was a single field separate from the folder structure and therefore you had to enter text in each connection profile. With the more advanced group hierarchy and tagging of RoyalTS this could be taken further, imagine being able to chose the level or levels of group tabs from the Navigation Panel that you want the organisation of the tabs under the Dashboard view.

This is very useful because often these days server hostnames are not descriptive for security reasons, so you can lose track of multiple open connections and hovering the mouse over the connection tab to see details just wastes time.

Often you want to work on Production and Pre-Production sessions at the same time and you want to keep them visually clear. Imagine an overall red coloured "Production" and a blue coloured "pre production" group tab (taking the colouring from the Navigation panel) on the dashboard display which would clearly segregate multiple connection tabs at a high level. Where as currently Red "Production" connection tabs will be intermingled with "blue" pre-production ones.

unfortunately the UI framework we are using in Royal TS doesn't allow us to create tab groups like in mRemote. The tab coloring feature should help you to distinguish between production and test machines and you can also drag tabs to an external host window and organize/group them there but nested tabs are not possible at the moment. Sorry.